ECE 22.06 is the new European motorcycle helmet testing regulation, brought in to replace ECE 22.05. Each helmet put on sale in Europe has to pass a series of rigorous tests before it can be sold.

Every so often, the United Nations reviews motorbike helmet safety and decides whether its regulations can be improved to make motorcycle helmets more protective.

In June 2020, their working party published their latest regulations – the first in around 20 years – and they’ve been brought in to replace the old ECE 22.05 regs that we all know and love.

But don’t worry if you’re still wearing an ECE 22.05 helmet.

New helmets only have to conform to these new regs from January 2024 and even then, old ECE 22.05 helmets will still be legal. It’s only new helmets on sale that will have to be 22.06 from that date on.

Will Motorcycle Helmets get bigger?

No... Get the image of juggernaut out of your head.

ECE.22.06 is a new level of testing, making sure that your gorgeous full carbon RPHA is going to do it's job and offer the most amount of protection.

Helmets are evolving just like everything else. Mobile phones started off big and bulky. Now you can walk the streets with an Xbox one in your pocket. The same goes for Helmets, well maybe not the Xbox part.. But using science, we now have the ability to use less materials whilst offering better impact absorbing technology.

Testing is now very comprehensive and requires a first round of helmet testing for an approval test and then a second round of testing on the finished production helmets.

For a helmet model that’s only sold with a single helmet shell (to cover all fitment sizes), that’ll mean testing 55 helmets.

For a more premium helmet – one that’s made in 3 different shell sizes – that means testing 135 helmets in all it’s different sizes, before they hit the shelves!

And that figure can go up even further if there are more variations – like if it’s available with two different types of fasteners.

ECE 22.06 ensures the basic layout of the helmet is defined (hard outer shell, shock absorbing inner etc. etc.) and ensures a helmet has a large enough view port to look out of as well as provide enough coverage to give effective head protection.

It must also be able to tolerate ageing and shouldn’t reduce in protection through exposure to sunlight, temperature changes or rain. 22.06 testing therefore conditions helmets using various temperatures, humidity, water and exposure to UV lights to simulate these various conditions.

Obviously, the helmet liner is one of the key components in any helmet and comprises the shock absorbing liner as well as a comfort liner.

Apart from protecting the user and absorbing energy, the liner shouldn’t deteriorate and it shouldn’t be affected by sweat or cosmetics or hair products. It shouldn’t cause skin irritation either.

And of course, the shock absorbing liner plays a key part in passing the impact tests.

Interestingly, it’s actually in the 22.06 regs (as it was in 22.05 before it) that helmets cannot dangerously affect the wearer’s ability to hear. Which means of course, you’ll never find a truly silent ECE 22.06 helmet, even though manufacturers may well be able to make one!

The chin strap must be fit for purpose, permanently fixed and not too thin. It shouldn’t stretch either.

The fastener also has to be fit for purpose, including only open when the user wants it to, not be capable of being partially closed and it must be easy to use.

They’re also tested to check the strap and fastener are strong enough using a 10Kg weight dropped from .75m and checking for damage or stretching – and checking the fastener still works and stays closed.

Essentially, they check the durability and ease of use of the straps and fasteners as well as their strength.

If there’s a moveable chin bar – like on a modular helmet – it must be able to stay in place during impact tests in both Jet (J) and chin bar down in protective full face mode (P).

Peripheral vision is tested so the helmet doesn’t obscure vision in any direction. 22.06 also specifies a minimum level of light transmittance through a visor and for the first time specifies transmission through lcd or photochromic visors (which, like sun visors, can go down to 20% light transmission).

The standard also covers distortion levels, scratch resistance, defects, mist resistance (for fog-free visors) and refraction levels. There’s even a test to check whether signal lights are visible through a tinted visor.

New for 22.06 is the impact testing of visors to ensure they can resist penetration. In this test, a 6mm steel ball is fired at 80m/s or 180mph at the visor. It must stop the ball going through the visor, and if the visor breaks, it shouldn’t shatter into shards.

UNECE has always had a comprehensive range of helmet impact tests, but they’ve now upped the number, introduced a higher and lower speed test, and introduced an angled impact test to simulate hitting an object that then spins the helmet, potentially causing brain damage.

Interestingly, SHARP has had an angled test and higher speed test in it’s standard since they began, and now UNECE seems to have caught up.

ECE 22.06 also includes fitting various official accessories to helmets, such as sun visors and OEM externally fitted mounts, to ensure they don’t cause damage to the helmet (and rider) during testing.

Impact speeds include 6.0m/s, 7.5m/s and 8.2m/s (8.5m/s for the oblique test) to cover a range of lower and higher speed impacts. Though note, you may be surprised to hear that 8.5m/s still only equates to less than 20 mph! I think the idea for helmet testing is that helmets protect against survivable impacts and that in reality, the speed of impact is usually quite low – but that’s all for an entirely different article!

Helmets are then tested against a flat steel anvil, a kerbstone anvil and an angled ‘bar’ anvil, with a variety of headforms of different weights placed in the helmets.

For all tests, helmets are tested at four different points on the helmet shell and against the chin guard. Further tests are then conducted with 3 impacts randomly chosen from 12 predetermined impact points to ensure the system can’t be gamed (where manufacturers strengthen only the test points).

People have long known how dangerous instant rotation of a helmet can be for both neck and brain damage, and now the ECE regs have caught up.

A bar anvil is used in the rotation or oblique angled test. It’s a severe 15° from the vertical, has 5 case-hardened steel bars across it and is covered by 80 grade aluminium oxide abrasive paper! It’s a serious test and is designed to test the rotation-inducing forces caused by the helmet hitting a high friction surface, along with any accessories fitted.

22.06 uses brain injury criterion (BrIC) derived from a rotation acceleration figure to calculate whether a helmet has passed the oblique test. Essentially, rotational acceleration can’t exceed 10,400 rad/s2 for any test.

Helmet shells are also tested for deformation, with conditioned helmets placed under a max of 630 Newton load (around 10 stones/64Kg/141lbs)  – both side to side and front to back – and deformations measured.

Helmets will only pass if they deform less than 40mm when under maximum load and 15mm when under the minimum 30 N load.

The standard also stipulates what stickers and labels have to be added and what warnings are necessary for items such as solvents or stickers that can’t be used on a helmet shell.

Helmet labeling consists of a large E in a circle with a number, the number corresponding to a country. UK is E11, Italy is E3, and so on.

The numbers next to the E mark is (in order) the type approval (06), then the helmet approval number, the type of protection the helmet offers /J (jet or open face helmets) /P (protective chin bar for full face helmets) etc. followed by a hyphen then the production serial number.

That’s Right! HJC have teamed up with Activision. This one is for all of those hardcore gamers, If this doesn’t 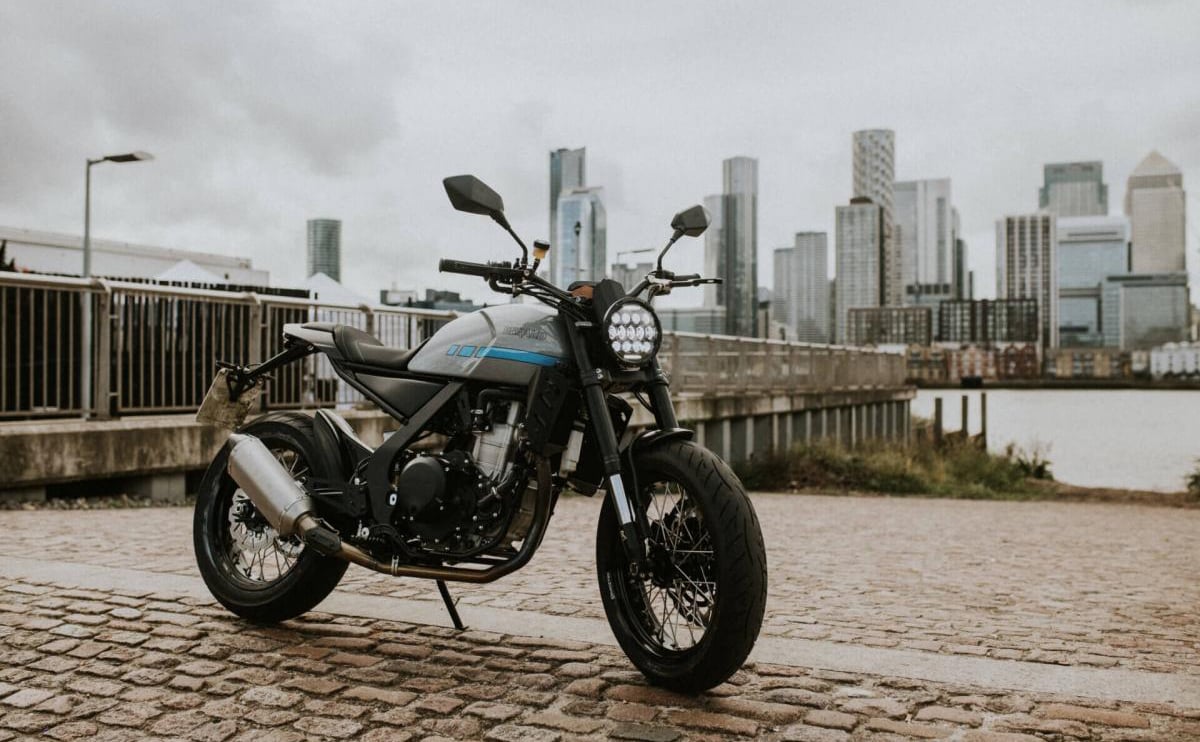 DESIGNED, ENGINEERED AND BUILT IN BRITAIN. There’s nothing quite like a large single for hard hitting torque that brings a